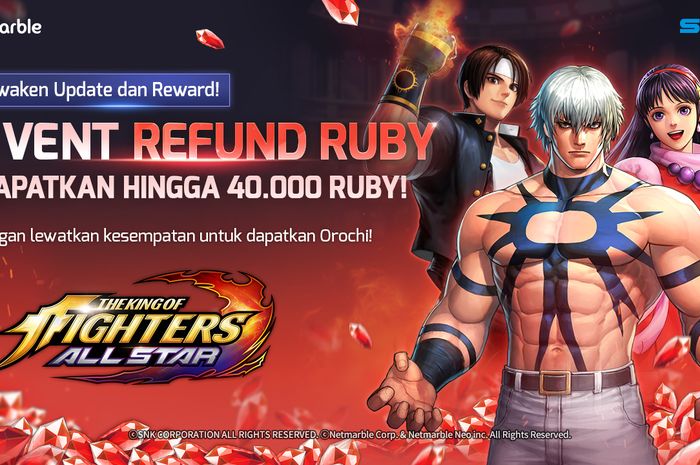 The new update of THE KING OF FIGHTERS ALLSTAR for June

GridGames.ID – The latest news comes from the mobile action RPG game “The King of Fighters Allstar” which announced its latest update today (5/6).

The game made by Netmarble presents the ‘Ruby Refund Event’ along with the Awaken Update.

For those who don’t know, Awaken is a new feature for players who want to strengthen their character collection line.

This limited-period ‘Refund Ruby’ event provides additional Ruby according to the amount that has been used by players.

The rubies given during the event can only be used for a limited period from June 4 to July 23, 2022.

Additional features that are present in the latest update of The King of Fighters Allstar is ‘Awaken’.

Players can now Awaken Fighters who have reached Lv. 90 using the ‘Awaken’ and ‘Imprint’ materials from the ‘Awaken Dungeon’.

After Awaken, Fighters will have Awaken Skills, greater stats, and various other benefits with a maximum of tier 5 Awaken for each Fighter.

In addition, players can also have the opportunity to collect Orochi from The King of Fighters Allstar’97 as a special gift available only until June 30, 2022.

The King of Fighters Allstar features fast-paced action combat where players fight against various enemies, Bosses, and other team fighters.

This game features all the legendary KOF fighters from ’94 to XIV with over 130 Fighters to collect.

Uniquely, this game also presents seasonal events that collaborate with famous IPs such as TEKKEN 7 and SAMURAI SHODOWN.