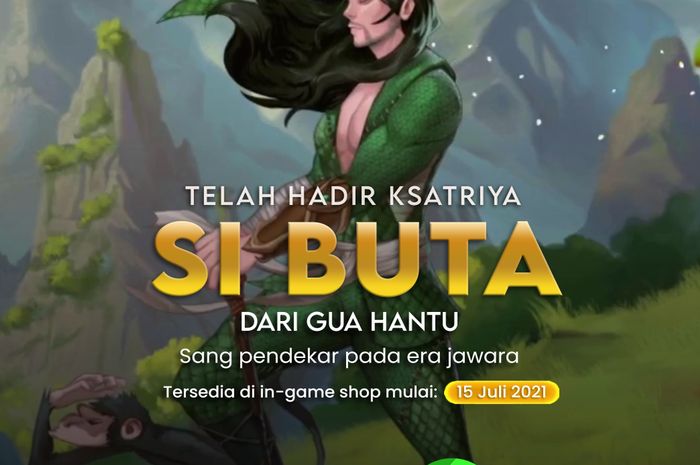 GridGames.ID – In the mission of developing Indonesian intellectual property, Lokapala continues to provide characters or Ksatriya based on history and mythology from Indonesia.

Now, PT Melon Indonesia, as the publisher of the Lokapala game, has officially collaborated with Bumilangit Entertainment.

The fruit of this collaboration also resulted in the blind character from the Ghost Cave as the newest knight in the Lokapala game.

Si Buta from the Ghost Cave itself is the main character of the Indonesian comic series entitled “Si Buta dari Gua Hantu” created by Ganes TH.

The comic series was first released in 1967 and has printed up to 500 thousand and has been made into 7 feature films and 2 television series.

Now, after more than 50 years since its first release, Si Buta from Gua Hantu has entered the Bumilangit Cinematic Universe, digital comics, and video games.

Coinciding with Ganes TH’s birthday in July, the Blind Man character from the Ghost Cave was summoned by the Ancient Ones to fight with other Ksatriyas in the Lokapala world.

Bismarka Kurniawan, as the Founder and CEO of Bumilangit Entertainment, revealed that the adoption of the Si Buta character from the Ghost Cave in a game made by Indonesia, Lokapala, allows fans to use it in the latest digital game form.